_ The Sphynx is a cat like any other. His nakedness, his big ears and his facial expression make him an atypical cat. He is both loved and hated, but he never lets indifferent. And there is his personality... 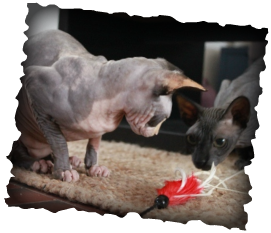 __ The main characteristic is his clinginess. It's not the kind of cat who'll turn up at lunch time then ignore you when repleted. On the contrary, he'll never get enough kisses and caresses. He'll love cuddling in your arms, climbing on your lap, and sleeping in your bed. It's also an essential need for him, and not doing so would make him depressed and unhappy. That why by adopting a sphynx, you should be aware that you'll have to dedicate a lot of time to your cat.

The sphynx is a very curious and interested animal. He'll follow you anywhere, he'll snoop in your grocery bag or your purse. He'll welcome new people into your house, and he's very friendly with newcomers, wether they're human or animal.

As you'll realize right after his arrival, he is very adaptable. If his breeder raised him well among other cats, he won't be upset by his new environment and he'll want to meet every member of your family right away. However, as any cat he'll appreciate stability in his life.

He's very playful, and sometimes clumsy, charming, and knows how to make you understand what he wants. It's impossible no to fall in love with him ! Most of the time, people who didn't like them at first left our house completely smitten with Sphynxes. If you doubt it, come and see !

The first naked cats appeared in the XX century, all around the world (France, USA, Australia, Canada...). In 1936 and 1938 respectively, a common cat gave birth to a completely hairless kitten, and a couple of Siamese cats gave birth to two hairless kittens. Later, on a litter of nine Siameses, three were hairless. After being mated together, they produced three more naked cats.

Sphynx breeding officially appeared in 1966, but as we just saw, hairless cats existed before that. This absence of hair is due to a natural mutation. The gene responsible for it (Hr gene) was identified in 2010.

Some Sphynxes can have very short and thin hairs on various parts of their bodies, very soft to touch.

x Is the skin especially fragile?

No, it's not. However, Sphynxes can get sunburns if they are directly exposed for too long, just like humans.

x Is the Sphynx particularly sensitive to the cold?

Again, no. His skin produces more sebum and collagen than common cat's, which gives him a natural and efficient protection against the cold. Besides, he eats more than ordinary cats throughout the day (he needs to have access to his food at any time). However, even if he's not cold, he likes to cuddle under a blanket in the winter for a short nap.

x Is the sphynx more fragile than other cats ?

He's not. His hairlessness is not caused by a deficiency or health issue. His immune system is perfectly normal and functional. His life expectancy is the same as other cats'.
However, I want to add that Sphynxes are subject to Hypertrophic Cardiomyopathy, an incurable disease that manifests itself by a thickening of the cardiac muscle walls. It leads to a malfunction of the heart. You can read more about it here.

_x Is the Sphynx hypoallergenic because of his hairlessness?

No. Contrary to popular belief, allergens are situated in the sebaceous and salivary glands, and not the hair. However, Sphynxes have less allergens than others cats. The best solution is to visit a breeding for a few hours to make sure you tolerate Sphynxes.

_ To know more about Sphynxes in general, you can read this thesis (in French) :